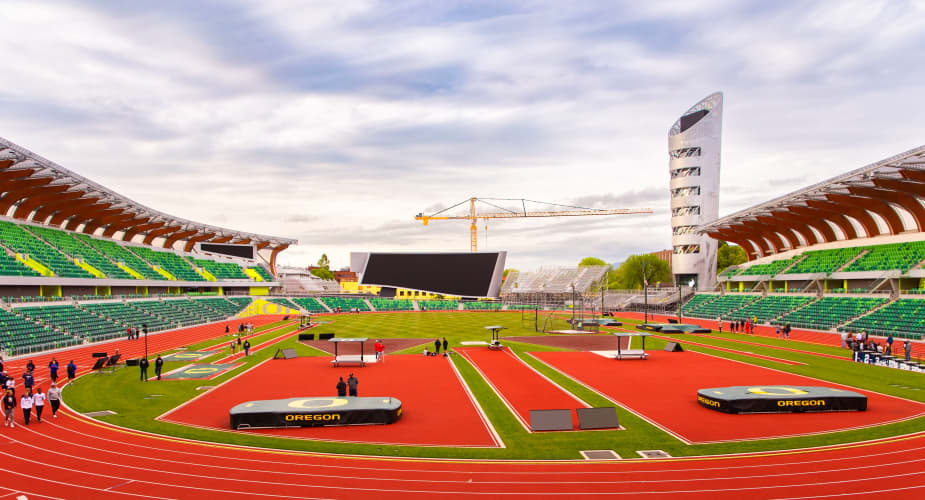 Eugene is famous for being the hub of art, culture, history, events, sport, education, shopping, eateries, and other outdoor and recreational activities. Hence, Eugene earned its official slogan “A Great City for the Arts and Outdoors.” Eugene also has a nickname of “Track Town USA” with several other nicknames.

Eugene is located on the Willamette River and is ranked as the third-most populous city in Oregon having 176,654 residents as reported in the 2020 census.

In Eugene, summers are hot and dry, whereas the weather is cool and wet in winter. Autumn is the driest season, and spring is rainy for 35% of the season. In fact, Eugene is rumored to be one of the rainiest cities in the USA.

Eugene is home to the University of Oregon and the homeland of Nike as well. If you are a new resident, Eugene has a lot for you to explore. Here are some must-see spots in Track Town, USA.

This iconic track and field stadium Hayward Field is located at the University of Oregon and is considered to be a Eugene treasure by both athletes and fans.

Hayward Field Stadium, named after a track coach Bill Hayward, was established in 1919 and initially opened for the football team. Hayward has a capacity of 12900 that is expandable to 30,000. Hayward Field is the home of the Oregon Ducks college track and field team.

It has been host to NCAA track championships and Prefontaine Classic for many years. Eugene entertained many U.S Olympic trials here, including The World U20 Championship 2014. Moreover, Eugene is a host for World Athletic Championships 2022.

Hayward Field is the home of the Oregon Ducks college track and field team.

Alton Baker Park, located on the river Williamette, covers an area of around 400 acres. The park is named after  Alton F. Baker Sr. who was the eleventh owner of “The Guard” newspaper and has been the city’s largest park since 1959.

Alton Baker Park is a great place to enjoy nature and recreational activities. The park also has a pond and a stream in the middle. The Eugene Solar System Model also starts here with the sun and some other planets within a walking distance.

Other attractions include a quiet place for a picnic, feeding the ducks, barbecues, and a golf course. A concert venue, canoe canal, and a BMX track are must-see spots for visitors.

At Alton Baker Park, a riverside restaurant offers a range of burgers and beers. There are other nearby restaurants as well for a wide variety of lunch or meal menus.

Museum of Natural and Cultural History

This world-class museum displays 15,000 years of Oregon’s cultural history and 300 million years of its natural history.

Visitors come here to explore the galleries. From giant spike-tooth salmon, fossil collection, and the world’s oldest shoes, to the evolution of animals from millions of years ago, the displays here are richly filled with history.

The museum offers various programs and events for all ages. These are Nature Night - Enjoy the Birds of Oregon event at Cascades Raptor Center. Photo Ark event displays compelling images and videos of animals from all over the world. UO Commencement is an event for Duck graduates.

Another famous exhibit is Natural Athletes track and field competitions with tigers, kangaroos, chimps, and other animals through interactive stations. The Museum Shop offers crafts of local, native and regional artists, science exhibits, books, and field guides for sale. Any purchase from this shop is a donation to the museum’s educational programs.

The Hult Center is a is a performing arts venue located in the heart of Eugene’s downtown and is home to many performance groups as well as 4 Resident Companies. The Hult Center for Performing Arts has been hosting performances since its opening in 1982. The center caters to more than 700 performance events annually that can vary from classic to pop.

The Hult Center has attractive architecture featuring a towering glass lobby, the grand 2448 seats in Silva Concert Hall, and 496 seats in Soreng Theater.

The Hult Center offers a Broadway presenter, local dance groups, and touring shows featuring comedy, rock, blues, and family events that fill the Silva Concert Hall and Soreng Theater throughout the year. The Hult is a great place for ballet, opera, classical music, and live concerts.

Hult Center Concessions is a stop for beverages, wineries, breweries, and snacks. Moreover, there are many eateries and breweries within a walking distance of The Hult Center.

This market was introduced in May 1970 and is Oregon’s oldest open-air craft market in the USA. Eugene Saturday Market takes place only on Saturdays and operates from 10:00 a.m to 5:00 p.m. The seasoned market is open from April to November.

Eugene’s Saturday market mainly allows the sale of goods that are either handmade by the vendor or anyone in their immediate family. These goods include a wide variety of fashion, jewelry, art, and kitchenware pieces.

Local musicians and other performing artists are assigned a separate venue at the Eugene Saturday Market. The market hosts six stage performances every week along with a kid-friendly show on the Saturday Market stage. Strolling entertainers can also be found in open spaces around the Park Blocks.

You can also buy food from one of the food carts while listening to local musicians. Moreover, International Food Court, with 15 food booths, is famous for serving freshly prepared food to customers including homemade pastries, bread, and other baked items.

If you are relocating to Eugene, Oregon, you need assistance to protect your items from breakage, scratching, or any damage during transit. Let’s accomplish this task with a team of experts - PacWest Moving and Delivery to help you move safely and happily.