A Moving Guide for the Largest Cities in Oregon

A Moving Guide for the Largest Cities in Oregon 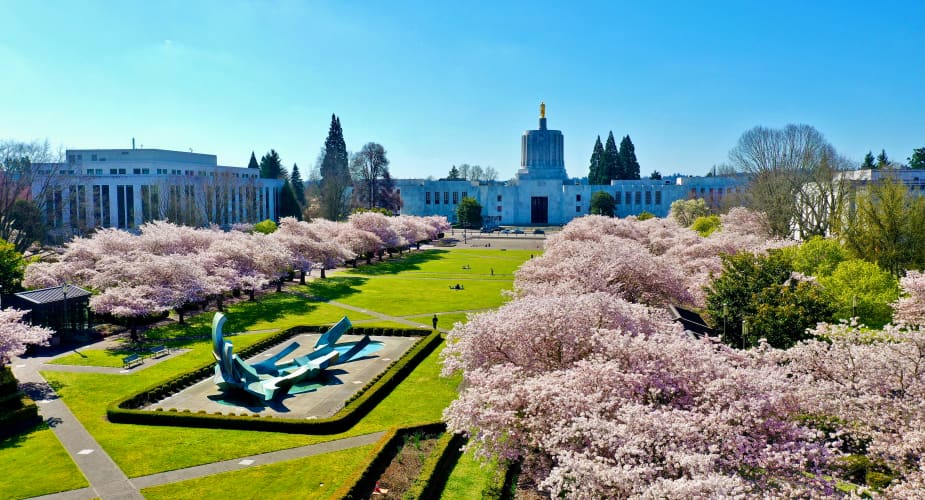 Thinking of moving to Oregon? That's a great choice. Did you know that Oregon is one of the only five states in America that offers no sales tax? This means that the number you see on the price tag is what you pay.

We could probably end the list there but there are so many things that this beautiful state has to offer. If you are thinking of moving to Oregon, then this blog post is for you. Read on to get a gist of what it’s like living in the largest cities in Oregon.

Oregon has a range of scenic attractions including beautiful resorts, sandy beaches, rivers, and breathtaking coastal landscapes that provide the perfect settings for waterfall dives, hikes, kiteboarding, windsurfing, and more.

Here’s everything you to know:

Oregon is the 10th largest state with a population of about 6.1 million people and still growing. Each household has an average of 2-3 people. The population of Oregon has steadily increased over the last few decades with a significant increase in the proportion of older adults.

While there are significant weather fluctuations due to the state's diverse landforms, the majority of Oregon enjoys a warm climate.

The western section of the state has an oceanic climate and is covered with lush evergreen mixed forests. It is wet in the winter, rainy in the spring, and dry in the summer. Eastern Oregon has low humidity throughout the year.

The two-sided flag of Oregon became official in 1925. The front side shows the escutcheon of the state seal supported by 33 five-pointed stars.

On the other side is a beaver (one of the state’s official symbols). All the elements of this flag are in gold on a navy-blue field.

When was the last time you saw a llama? Did you know that a quarter of the world's Llama population is right here in Oregon? Most of them are found in Clackamas County closely followed by Marion, Yamhill, and Washington counties.

Demographics look into the population, race, income, and poverty statistics. Learn more about these factors below:

Oregon's politics are primarily concerned with regional issues. Western Oregon has historically been Democratic, while eastern Oregon has been Republican. As of 2021, Oregon had 2,938,429 registered voters.

Oregon culture has had a diversified and distinct character. Before the emergence of European American colonies and, eventually, extensive displacement of the local indigenous tribes, Oregon was home to over 80 Native American tribes.

The urban centers in Oregon are characterized by larger populations with a more metropolitan feel but with little to no traffic. Unlike other big cities, Oregon's urban centers are closer to nature. For example, from Portland, you can drive an hour east to get to the mountains and an hour west to the ocean.

Rural towns in Oregon are based around fisheries, farms, wineries, manufacturing plants, and more. The rural population in this state is about 30% and occupies over 90% of the state’s land.

What Are the Largest Cities in Oregon?

Besides its natural beauty, Oregon also has its fair share of urban charms. Most of the major cities in Oregon are within the 150-mile Willamette Valley.

Portland – the state’s largest city – is renowned worldwide for its offbeat and welcoming culture. With a population of about 650,000, this city has a small-town laid-back feel with a reputation for art, beer, and quirkiness.

The range and diversity of job opportunities in Portland make it one of the best places to settle in the country. It is home to world-renowned companies such as Nike, Under Armor, Adidas, and Keen. Top universities in the city include Portland State University and the University of Portland.

When moving to one of the most populated cities in Oregon, you'll want to hire professional moving services to save yourself time and money.

Fun fact: Portland is home to the smallest park in the world which is about 25 inches in size - the Mill Ends Park.

Salem is the capital city of Oregon. It has a population of around 150,000 people and continues to grow by the day. It became Oregon's capital in 1851 and is now known for its scenic splendor including gardens, flower meadows, vineyards, and lush pastures.

Salem is quite rainy. So if you are moving to this city, ensure you use professional movers to safely pack your items.

Eugene is a unique terrain located at the southern end of the Willamette Valley with a population of about 170,000. It’s a cultural hub brimming with artists, innovators, and visionaries.

The city is commonly known as TrackTown USA because it's home to many great Olympic runners and hosts major track and field events. Some of the major universities within the city are the University of Oregon and South University.

Make your move to Eugene fast and effortless by utilizing the services of professional movers in Oregon.

Fun fact: Eugene is the birthplace of Nike.

Ranked as one of the best places to live, Hillsboro hosts several big tech companies like Genentech and Intel. With a population of about 110,000, this is a region that comes with all the big-city amenities with a small-town feel.

There is plenty to do in Hillsboro – from sipping craft beer at the Vertigo Brewing & Taproom to visiting the Rice Northwest Museum of Rocks & Minerals. There is also never a shortage of fresh produce from the farmers' market.

Fun fact: The city is named in tribute to David Hill – one of the early pioneers.

If you look at Oregon cities by population, Bend has the least on the list. With a population of about 93,000, this city is a mecca for outdoor lovers. It comes with endless horse and hiking trails as well as world-class skiing and biking spots.

The weather is gorgeous and reliable with an average of 162 sunshine days in a year. While most cities are concrete jungles, Bend is teeming with beautiful, sweet-smelling Ponderosa pine forests and scenic mountain views.

Fun fact: Bend has the highest average number of sunny days in Oregon.

Move To the Most Popular Cities in Oregon

If you are looking to live in the main cities in Oregon, there are a lot of beautiful places to choose from. The largest cities in Oregon offer an endless list of things to do, especially for outdoor lovers.

When moving to Oregon, look no further than PacWest Moving & Delivery. We’re well-equipped, trained, and experienced to ensure your items move safely and fast. You can never go wrong with using professional movers during your transition.