A Movers Guide for the Largest Cities in Washington [2022]

A Movers Guide for the Largest Cities in Washington [2022] 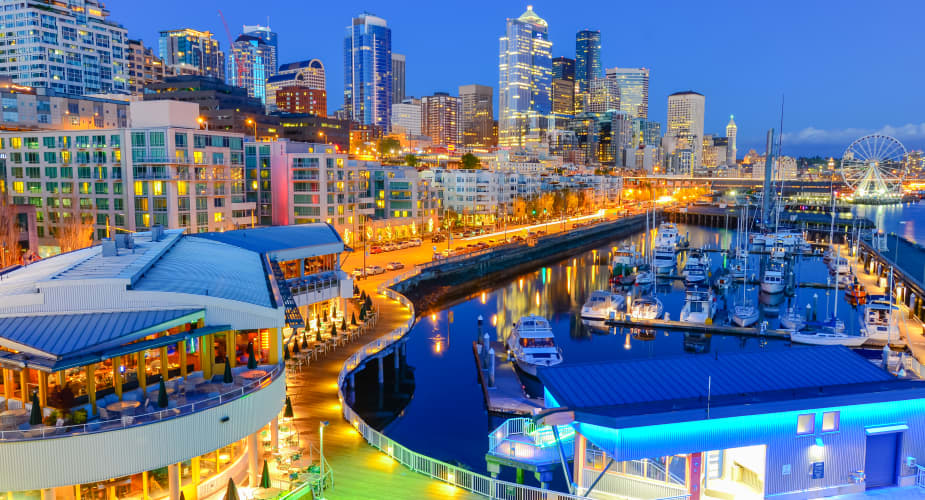 Known as the Evergreen State, it spans over 71,362 square miles and is the only state named after a president. It also produces the most apples of any state in the union.

Washington is positioned on the Ring of Fire along the Pacific Ocean known for its active volcanoes and earthquakes. It is the most-glaciated state in the US with more than 3,000 glaciers and is home to Mount Rainier at more than 14,410 feet tall.

Over seven and a half million people currently live in Washington State. In this article, we breakdown the five largest cities in the state of Washington by population. We discuss points of interest for each city and share out thoughts on what makes each location unique.

What to Know About Washington

First, you'll want to learn about the situation in Washington overall. Many people like living in Washington because they enjoy the temperate weather of the area. That's part of why Washington is called the Evergreen State, since the weather lets the local flora and fauna thrive.

The state bird of Washington is the Willow Goldfinch, The state tree is the Western Hemlock, and the state flower is the Coast Rhododendron. And, Washington is the only state to be named after a president, which is just one of the many things that make the state unique.

State-level politics in Washington tend to be Democratic. The current governor, Jay Inslee, is a Democrat, as are both Senators. However, while seven of Washington's congresspeople are Democrats, three are Republicans. The Republicans represent the more rural areas of the state, which highlights the urban and rural divide in Washington.

When you're thinking about moving to Washington, Seattle is probably the first option on your list. Seattle is the largest city in Washington, with a population of over 700,000 people. Seattle has tons of great neighborhoods to suit every lifestyle, so you're sure to find somewhere that feels like home for you.

Seattle is home to the major sports teams the Seattle Seahawks, the Seattle Kraken, Seattle Mariners, and Seattle Sounders FC. Seattle is a hub for arts and culture. Performing arts venues in the area include McCaw Hall, the 5th Avenue Theater, Benaroya Hall, Town Hall, and so many others.

Some of the great museums and galleries you'll never get tired of exploring are the Museum of Pop Culture, the Center for Wooden Boats, the Living Computer Museum, the Henry Art Gallery, the Northwest African American Museum, and the Pacific Science Center.

And, Seattle is becoming more and more prosperous. The city's Amazon hub means that more and more jobs are opening, and other companies are taking Amazon's cue. So, when you're thinking of moving to Seattle, there will be no shortage of jobs available.

If you're looking to live in the Eastern part of Washington, you may want to consider living in Spokane. It's one of the most popular cities in Washington. Spokane's annual population growth is currently 1.21 percent. It's the largest city in the state after Seattle.

Spokane is notable for being the place where Father's Day was invented. Universities found in the area include Spokane Community College, Gonzaga University, and Whitworth University.

The area is home to over six hospitals, which is helpful if you're looking for improved access to healthcare. And, there's a thriving media industry in Spokane. If you work in news, Spokane is one of the top towns in Washington for you.

Those who want to live on the water may want to consider living in Tacoma. Major employers in Tacoma include Joint Base Lewis–McChord, the state of Washington, CHI Franciscan Health, and MultiCare Health System. So, there are no shortages of hospitals in Tacoma.

There are plenty of opportunities for higher education in Tacoma. Area schools include the City University of Seattle-Tacoma, the University of Puget Sound, a satellite campus of The Evergreen State College, and many others.

Not to be confused with Vancouver, British Columbia, Vancouver, Washington is a great city to consider when you're moving to the state. Its proximity to Portland, Oregon makes it part of the Portland-Vancouver-Hillsboro metropolitan area.

There are lots of events to check out in Vancouver, too. The city's Recycled Arts Festival is a unique option.

If you're looking for work, you should definitely consider living in Bellevue. In recent years, many companies have opened hubs in Bellevue. Expedia is one such company, with giants like Google planning future developments. Amazon was actually founded in Bellevue, and now it's one of the biggest companies in the entire world.

Bellevue tends to be one of the pricier cities in the state, but the high average income and level of education make it more manageable to live in than most other expensive cities. The population of Bellevue is just over 150,000 people, so it's a more mid-sized city.

There is a lot of culture to explore in Bellevue. Art lovers will want to check out the Bellevue Arts Museum. If you have children, you can't miss out on the KidsQuest Children's Museum.

The cost of living in Bellevue is quite expensive, but the high average income and level of education make it attractive for newcomers.

Are you considering moving to Washington?

If you’re planning to move to Washington, strongly consider hiring professional residential movers. Professionals can make sure your stuff gets to your new home in one piece, and that the entire process goes smoothly. This will help reduce the stress of the moving experience and allow you to enjoy yourself.