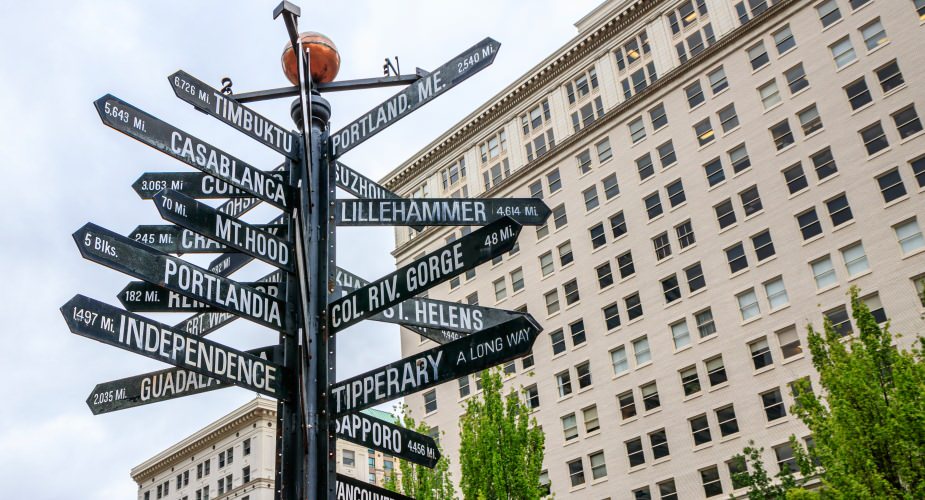 Portland, Oregon has been a destination for families and young couples going back over one hundred years. People have found its location, reputation, weather, and culture desirable.

Portland is located in the northwest of Oregon. In the distance, you can see the snow-covered peak of Mount Hood. It is known for beautiful parks, bridges, cycling paths, breweries, coffee shops, art galleries, theatre, museums, and music.

The climate here is a temperate rainforest. This keeps the climate cool year-round, not too hot, nor too cold. The cloud cover keeps the UV index low, which helps keep the comfort index above average for the U.S.

The neighborhoods of Portland are safe, relaxing, and full of entertainment. There are plenty of natural areas tucked into nooks all around the city, allowing you to unwind and get exercise.

One great element of Portland is that there are many up-and-coming neighborhoods that still fly under the radar. If you're looking to be one of the first to move to Portland and its trendy, lesser-known areas, check out this neighborhood guide.

Sellwood-Moreland is among the trendiest neighborhoods of Portland. There are several restaurants here, such as an Asian-fusion teahouse, sushi joints, Italian bistros, and neighborhood barbecue pits.

If you're looking for a nature park with stellar views, look no further than Oaks Bottom Wildlife Refuge. This sensational park has trails that run along the Willamette River. It is a large floodplain that offers protection to Salmon and over 175 species of birds. Be sure to bring your binoculars so you don't miss any of the endangered species unique to this refuge.

Sellwood-Moreland also has several well-manicured and safe urban parks with miles of walking and places to relax. Some of these are the Crystal Springs Rhododendron Garden, Sellwood Park, Springwater Corridor Trail, and Westmoreland Park.

After spending the afternoon in these picturesque parks, it's easy to find a place to find a drink. If you're after wine, beer, tea, or coffee, you'll be sure to easily locate an establishment of your preference. Some examples are the Either/Or Cafe, Bible Club bar/museum, Corkscrew Wine Bar, Tea Chai Te, or Blue Kangaroo Coffee Roasters.

Another great and often overlooked neighborhood in South Portland is South Waterfront. This neighborhood is perched on the west bank of the Willamette River, just south of the Ross Island Bridge.

In 2015, the city opened the Tilikum Crossing — the only bridge in Portland that is for pedestrian use. Besides, this neighborhood has easy access to the Portland Aerial Tram. This gives you quick access to public transportation and an excellent view of the city and Mt. Hood.

Restaurants in the area include a wide variety of food. There is excellent Lebanese food at Al Hawr, Ramen at Umai Japanese Twist, sandwiches at Elephants on Corbett, and Thai food at Thai PK.

The South Waterfront Greenway has a lot of opportunities for dog walking, jogging, walking, and biking. The city established this park in 2015 to improve the natural environment of the Willamette River.

This area is well-known as a very walkable neighborhood. It's well known for popular eateries, themed restaurants, and unique stores.

There are many well-known places to eat in this area. Bete-Lukas is an Ethiopian restaurant with incredible injera bread. Olympia Provisions Public House serves traditionally cured meats. And La Moule cooks up the best seafood and homemade french fries in the city.

As with most neighborhoods of Portland, this area also has several unique locations to grab a drink. One of the most unique bars is the Landmark Saloon. Here, you can find an authentic old-west style saloon where country music musicians perform nightly.

If you're looking for bookstores that sell older and harder-to-find books, this is the neighborhood to come to. Books with Pictures, Cloud 9 Comics, and Secret Forest Books sell books that you might not be able to find in other places.

Lents is a hip area with high affordability and walkability scores. It's well known for having lots of farmer's markets and international food.

Some of the best food is at K-Town Korean BBQ. This is a buffet with a traditional Korean flavor. Zoiglhaus brews dedicated German-style beers such as Pilsners and Kolsch beers. The taps are always different, so you can try different beers year-round.

Lents is undergoing the most rapid development in all the neighborhoods of Portland. Now is a good time to get in before it becomes more difficult in the future.

Guide to the Neighborhoods of Portland

Refer to this guide to get you started learning about the neighborhoods of Portland. These areas offer the following benefits:

If you are considering a move to South Portland, Southeast Portland, or East Portland, don't hesitate to reach out to a local Portland moving expert. They will have the expertise of the area and will happily guide you in your relocation.